Joanes or the Basque Whaler is inspired by two of the oldest known texts to be produced in North America, the last will and testaments of Juanes de Larrume and Joanes de Echaniz, Basque whalers who respectively died in Canada in the years 1577 and 1584.  ( a recent discovery by Michael Barkham, places Domingo de Luça, also a Basque fisherman, who died in 1563, as the oldest written document in North America).
The story is a series of graphic novels set in the Golden Age of Basque whaling, following a fictionalized Joanes and departuring from historical fact while weaving in elements of Basque mythology.
The comic book as a medium, uses a combination of myth, fantasy and history with the intention of entertaining while instructing about this emblematic development of the historic Basques.
The Basque whalers as a Genre comes to represent not only a very important symbol but an epic equivalent to that of the cowboy to the Americas, the Viking to Scandinavia or the Samurai to Japan

This first volume of a fictional epic tale scattered with Basque mythological reference Joanes, the protagonist, tries to make his fortune as a whaler during an era when the whales in the Bay of Biscay were becoming scarce.  Forced to look farther afield, but without the means to do so.
Here is when the story begins to depart from historical fact and the narrative weaves in elements of Basque Legend.  With the help of witches Joanes summons a sea-devil who assist him...But for a price!

The book ends with whatever possible danger hangs over the recent sucess of Joanes (and his crew) as he has to live up to his unhallowed pact.

Following on with the idea of Joanes as an anti-hero, his fame and fortune grows along with his notoriety as a blasphemous and impious drunk.

This defect will ultimately become his demise, something quite real, human and flawed, characteristically lacking in most heroes.
This second volume represents a turning point in the narrative: its climactic point of highest tension, is provided before the solution or conclusion. 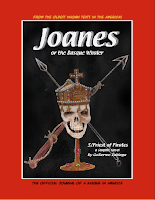 As far as we know in the Basque Country alone there are 3 skull-Chalices, The chalices are relics of 3 saints that are used as sacred goblets, filled with sacramental wine or with water as some kind of  "miracle" work for the treatment of head illnesses . These are
; Saint Victor of Fauma, in Alava and in Navarre Saint Gregory of Sorlada, and Saint William ( Guillermo) of Obanos.

The Church was a very important patron of commercial whaling, and had great economics links with the industry. The first testimony referring to Basque whaling goes back to the year 670 A.D. when Basques from Labourd shipped 40 barrels of oil for lighting to the Abby of Jumieges, on the banks of the the river Seine, France.
Later in 870 A.D. another reference to the basque whaling industry was made in the translations and miracles of saint Waast.
The church of Santa Maria of Lekeitio built in the XVI th century, is a noteworthy example of the late Biscay gothic style. The town of lekeitio became a booming whaling and privateering port throughout the middle ages and the renaissance.
Bayonne's cathedral, Saint Marie, was entirely funded by its whaling industry.

amazon.com Joanes or the Basque whaler


Or if you wish a signed ( or personlized) copy shoot me an EMAIL at gzubiaga@verizon.net

Here are some of the pages 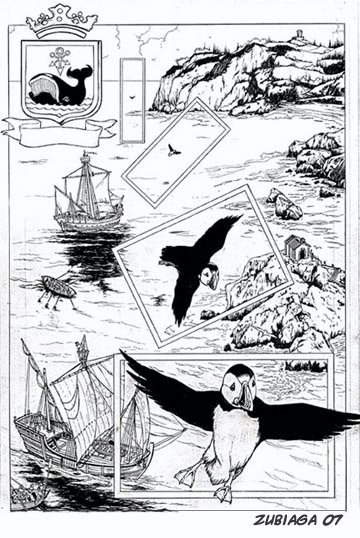 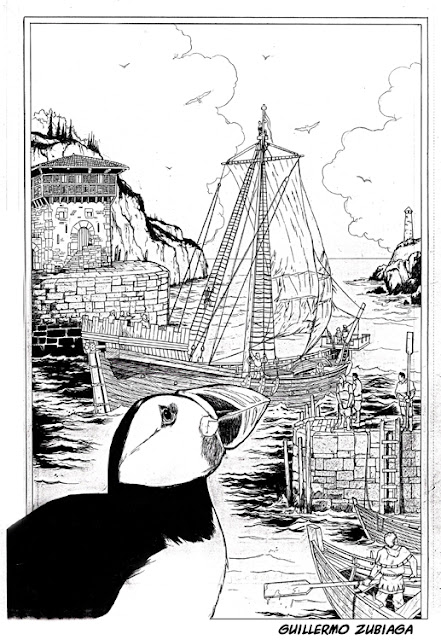 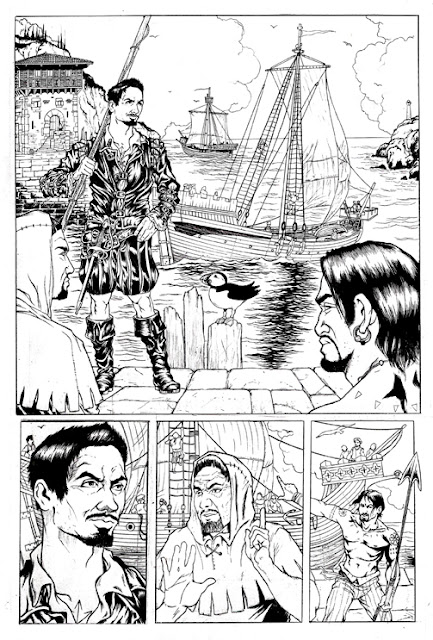 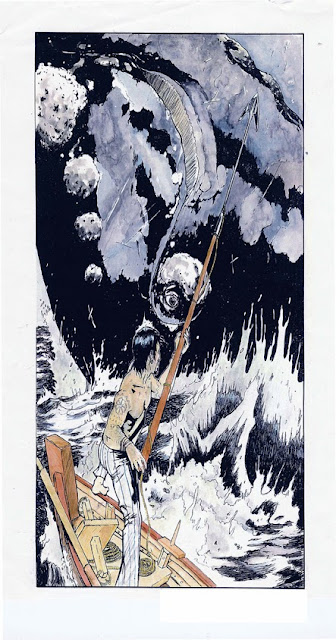 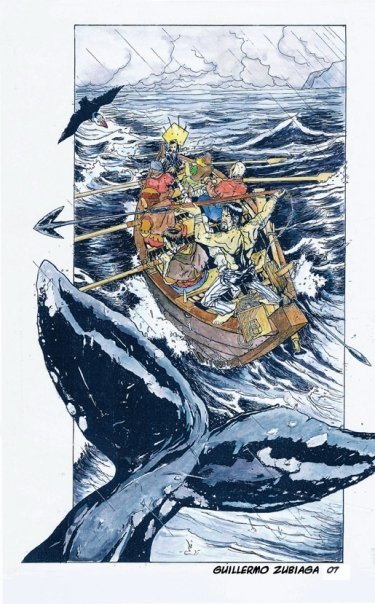 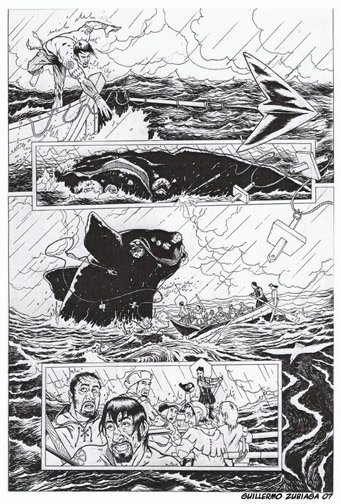 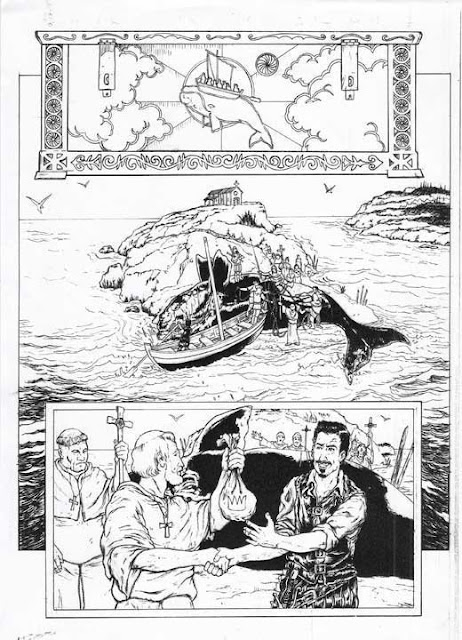 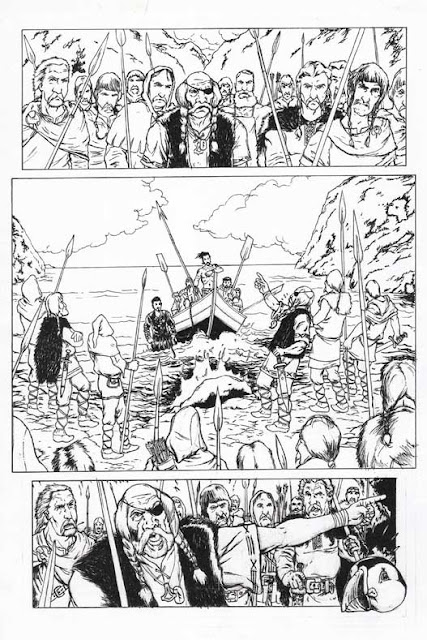 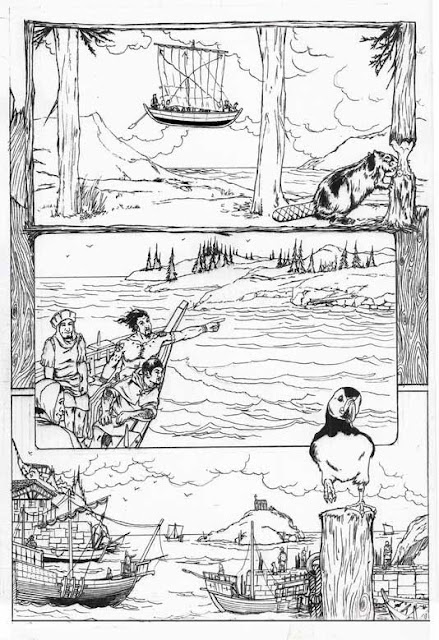 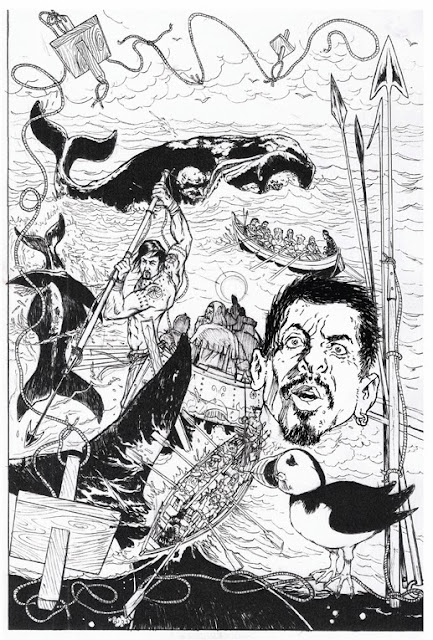 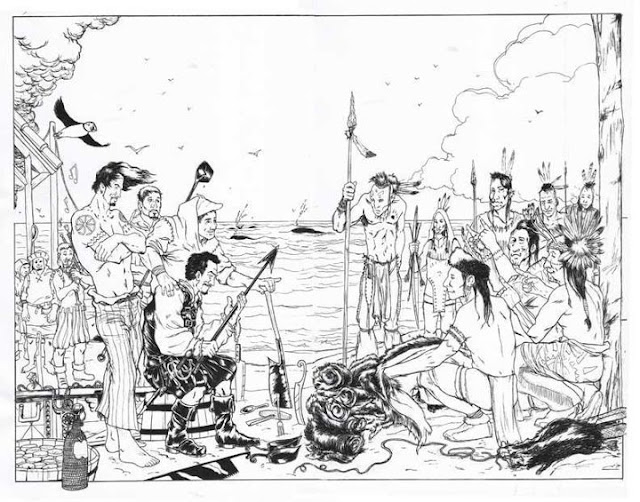 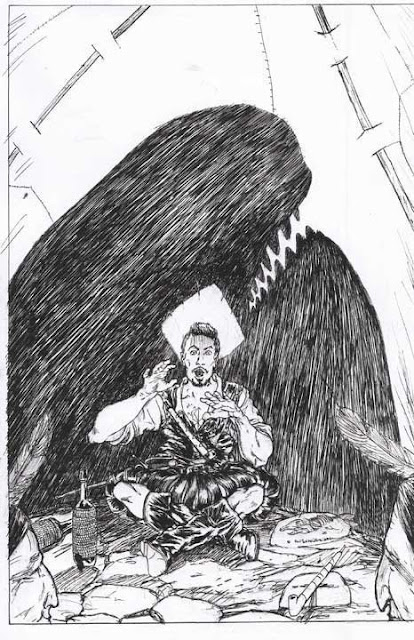 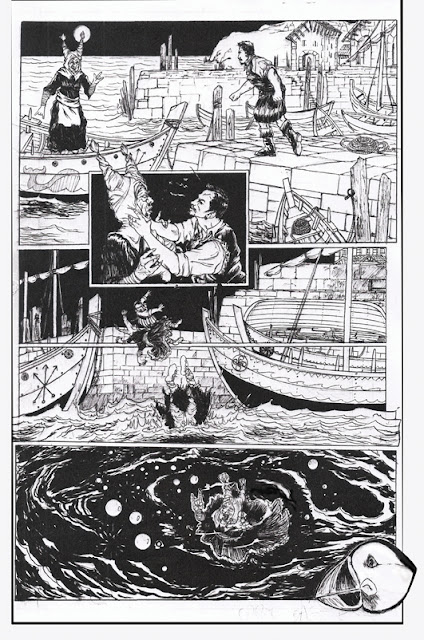 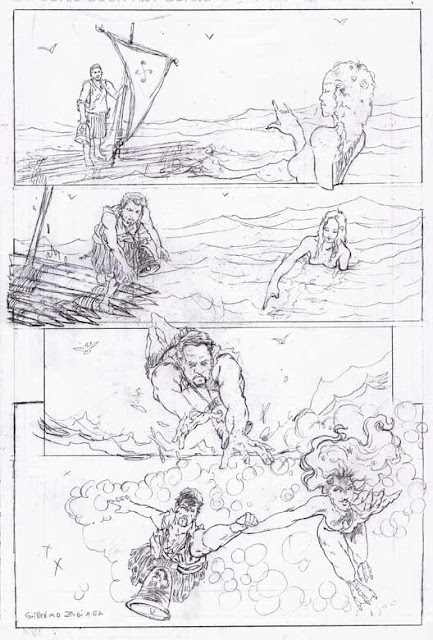 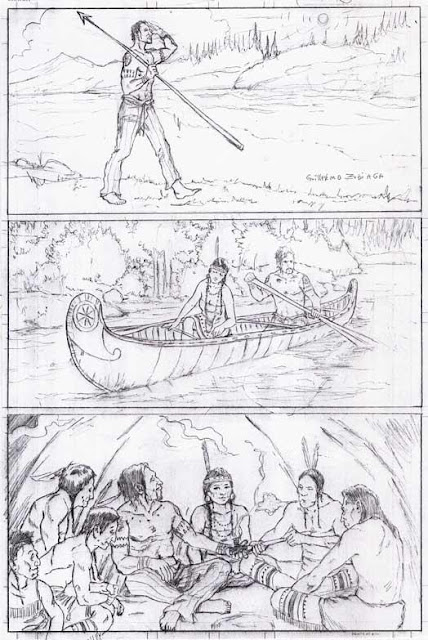 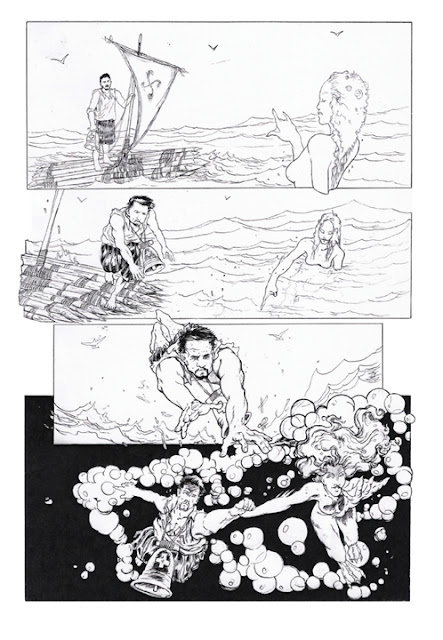 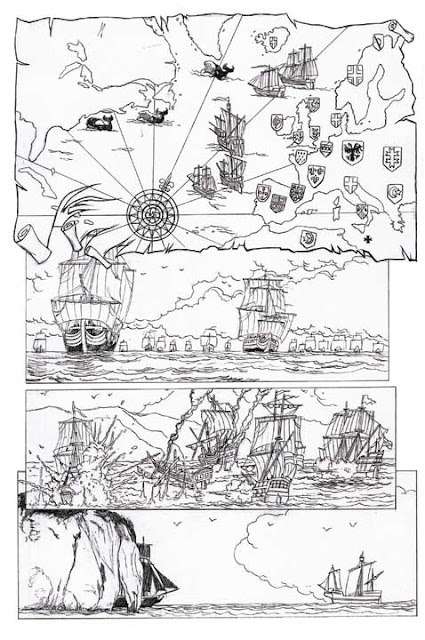 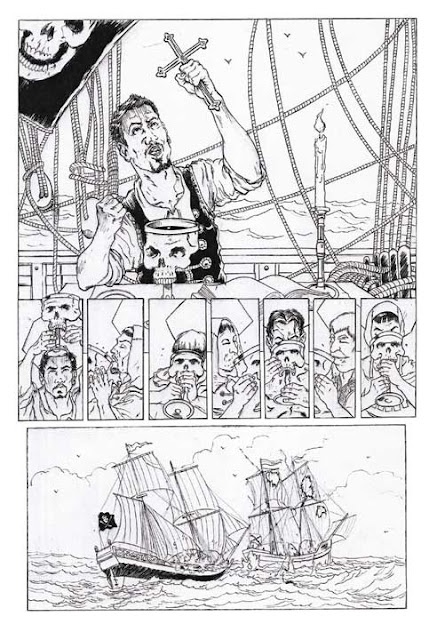 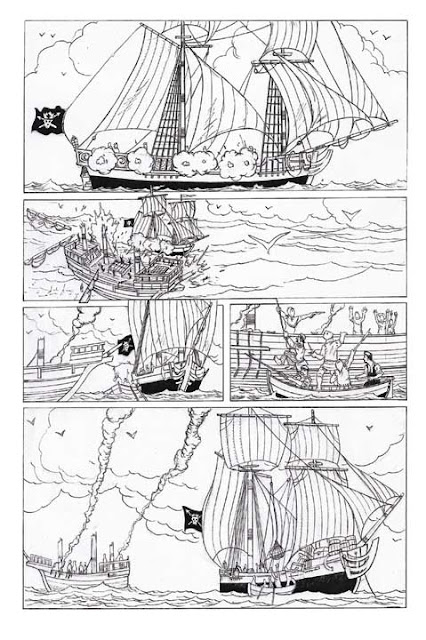 The video bellow  is form back in October 2011 during the NYC COMIC CON when my 2nd book was published but a few weeks before in September 28th, just in time to make its " official" presentation  While I was there my friend OLATZ ARRIETA paid me a visit with a tv crew from EiTB (Basque Television) and featured my small " footage" back on the old B.C. ( Basque Country- EUSKAL-HERRIA)
For those who don't understand our ancient language (EUSKERA)  you probably won't understand JACK so may as well be in CHINESE HAHAHA! (LOL).
While most of the media coverage comes form my beloved Basqueland the book is in American-English.  I find it curious (to say the less) that is as if I had to move the 5000 maritime miles that separate western Europe from the Americas and come to NY to draw this book and have it Published by the UNIVERSITY of NEVADA. So to all the Basque-American fellowship. ESKERRIK ASKO (THANK YOU)


Here is another version in Castellano


I have used video editing programs to "narrate" comic books in a format that is suitable for the internet, so I have developed animations for the first couple of the pages as Flash movies to broadcast on the web as interactive comics.

Joanes or the Basque Whaler is back with a new trilogy
In 2018 The University of Nevada ( my acting publisher) "green lighted" a second trilogy
Purposely a decade later its first episode came out December 2019.
EPISODE  4/ Traganarroo's Revenge 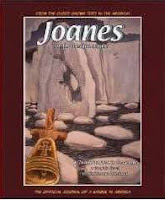 Previously in JOANES. Intro By BUBER

Our protagonist started being forced to look farther
beyond but with out the means. helped by witches, and a sea-devil...BUT FOR A Price!!
Success follows him as well as having to live up to his unhallowed pact.
along with his crew he’ll go to the depths of the ocean, to the coasts of New Foundland, and through glacial fields. Along the way, encountering a monster killer whale, a lamiak, Native American tribes, and British and Danish pirates.
towards the end Joanes stages his own death and is buried under Mysterious circumstances.
Reno: Center for Basque Studies, UNIVERISTY OF NEVADA, Reno 2019
36 pages, Paper, $7,50
(ISBN 9781949805093)
Coming Soon!
EPISODE  5/ The secret of Lamiak 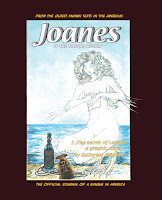